We arrived in Halls Creek late morning and checked into the Caravan Park.  Nice but very dusty.  We went down to the information centre but they were not very helpful - again.  We obtained more information from travel brochures and books. 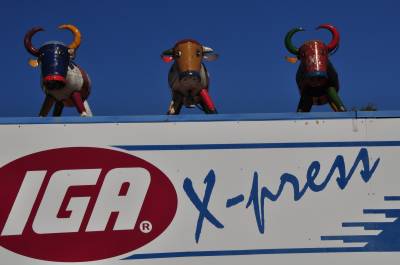 The local IGA had these colourful cows on their roof.

We set off down Duncan Road which if you keep following brings you out onto the highway just on the Northern Territory side of the border.  Our first stop was the China Wall 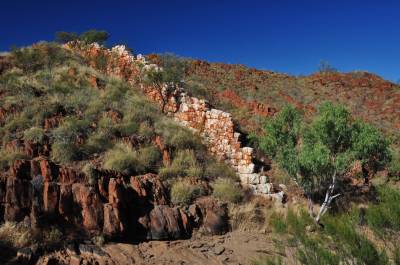 The China Wall is a quartz vein which runs for quite some distance but is most exposed at this creek.

Next was Caroline Springs which was quite nice but again due to the dry there was not much water. 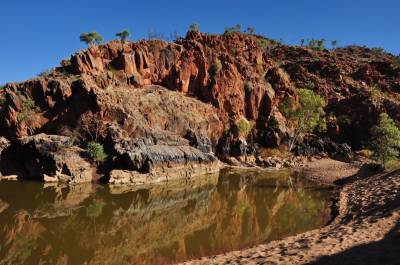 Then it was onto Old Halls Creek, the original site of the township when gold was first discovered here in the 1880’s.  There is not much left there now and what was there has been vandalised.  We debated about going on to the next two stops but decided to proceed.  The first one was Palm Springs – what an oasis.  Beautiful but unfortunately the camping spots were right next to the road. 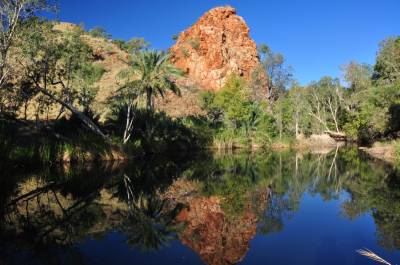 We then drove down to Sawpit Gorge which was 4 kilometres down a dirt track from Duncan Road.  Another beautiful camping spot although it was tent or roof top camper only.  I doubt you would even get a camper trailer in.  There were about six lots camped in there.  It reminded me very much of the West McDonald Ranges. 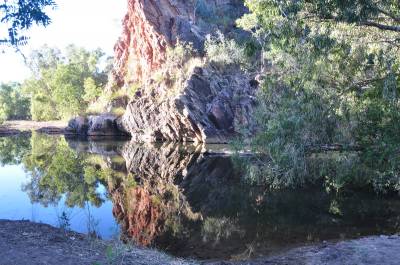 Next morning we headed off to Mary Pool Rest Area.  A free camp about 108 kilometres west of Halls Creek (another big day!).  We weren’t sure if we would get a spot there as it is very popular but when we arrived there were about 14 camps already there but we found a spot easily enough.  I reckon by nightfall there would have been between 40 and 50 caravans, camper vans, camper trailers, motorhomes and the odd tent there. 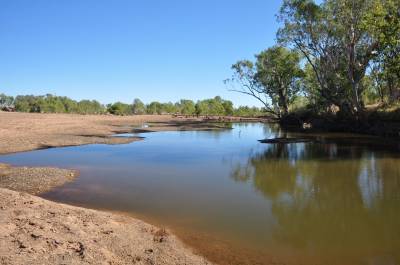 Mary Pool - not much water in the river unfortunately.

As we had plenty of time, the next day we travelled a little further down the road to the Ngumban Cliffs Lookout Rest Area where we parked up again for the night.  Another very pretty spot although it had come up very windy. 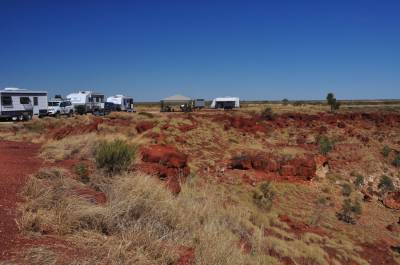 Ngumlan Cliffs Lookout - that is our van on the far right of the photo.  We had our vehicle and van facing into the wind so we weren't buffeted as much as the other vans parked across the cliffs (also I didn't have to worry about stepping off the cliff when I stepped out of the van).  Believe it or not but another van came in and parked between us and the shelter shed - talk about getting close!

Then it was on into Fitzroy Crossing where we booked into the Fitzroy River Resort and Caravan Park.  It is right on the banks of the Fitzroy River and apparently in the wet the caravan park part is under water.  The rest of the resort is either built up on stilts (and they are big stilts) or up on mounds.

We did the 4.00p.m.cruise of Geikie Gorge.  What a beautiful place and a great time of day to do the cruise.  Apparently this year is the first time they have had the 4.00p.m. cruise. 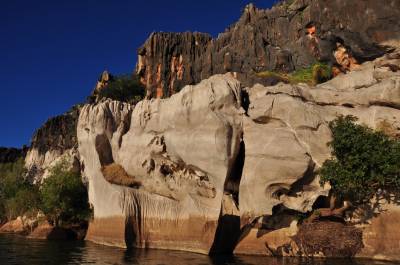 Of course I took hundreds of photos again. 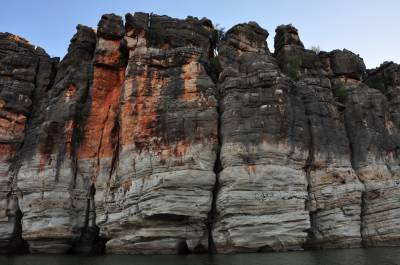 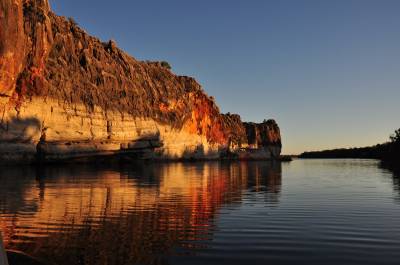 Next day we continued onto towards Derby but overnighting at another free camp called Ellendale Lake.  It is a campsite beside a small lake beside the highway on private property.  We actually missed the turn off as there was no sign post and only a small turn off.  Luckily as we passed Phil spied some caravans parked in there so we had to do a u-turn and go back.  It was another lovely spot and had some very quiet cattle. 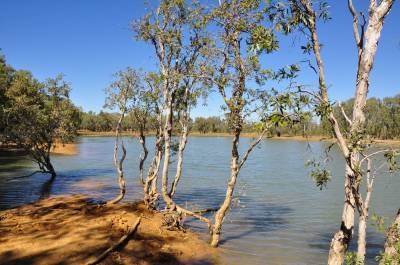 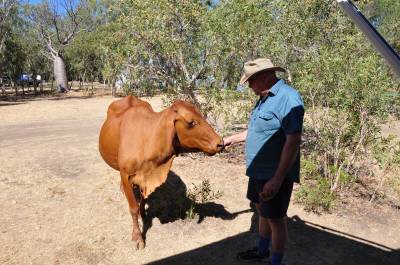 Phil making friends with the locals

The following day it was into Derby.  We quite like Derby, so far, as it is a very nice and well maintained looking town.  The caravan park is well organised - probably the best organised for storing vans etc that we have seen.  The town is set between two salt flats.  We have been down to the wharf – our first stop after checking into the caravan park.  We had dinner out at the café on the wharf on Saturday night and watched the sun set. 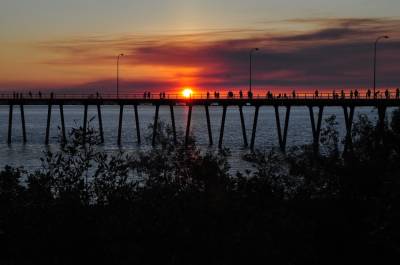 Sunday night the caravan park had entertainment on here – gold coin donation.  At 5.00p.m. they had two fellows, The Duo, playing music and singing who were quite good and then at 6.00p.m. they had another fellow, Alec Beckett on.  We had previously seen Alec busking in Tamworth and he is quite good to listen to – he sings some of Slim Dusty and Stan Coster’s songs as well as quite a few he has written himself.  Alec had another chap singing with him, a local aboriginal fellow, Sam Lovell, who use to be a drover and apparently is quite a legend in this area.  He must be quite elderly as he was talking about droving in 1959 but he did very well getting up to sing.  They were only suppose to play for an hour but ended up playing for about two and a half hours.  A long ‘happy hour’ and a late dinner!

We are here for another coupleof days and then we will be going out to Windjana Gorge and the western end of the Gibb River Road.

AND this week's Boab tree: 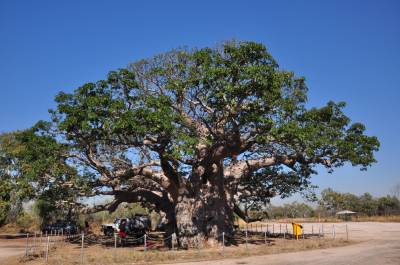 By accepting you will be accessing a service provided by a third-party external to https://mail.australiancaravanclub.com.au/