Long term Chairman of the Australian Caravan Club Tom Smith, today announced that he would be surrendering the Chairman’s role at the end of the Club’s Annual General meeting on Saturday 22 October 2016.

The announcement was made during Mr Smith’s address to Club members at the opening ceremony of the Club’s 10th Anniversary Annual Muster being held at the Shepparton Showgrounds this week. 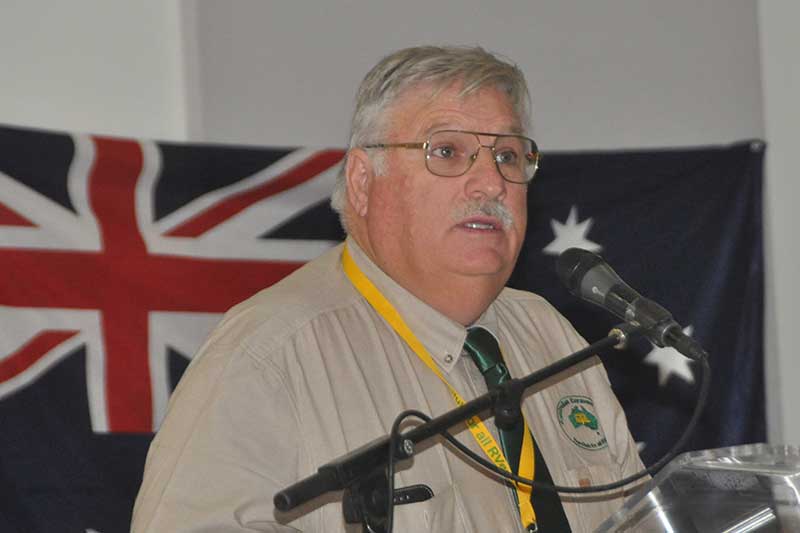 “Following this my main concern has been for an orderly and seamless transfer over the year.  The Board indicated to members that succession was in the wind by naming then Secretary, Craig Humphrey as Deputy Chairman,” Mr Smith said.

“Over the past year Craig and I have worked incredibly closely on all issues to ensure that there was an understanding between us on the direction of the Club. I am very glad to say that this has worked very well and the workings of the Club will be well championed.”

Mr Humphrey has been on the Board for seven years, and Club Secretary for the past five years. The Board has also undergone change with 2 new Directors – Graham Christie and Lynne Friis joining during the year.

“I wanted to ensure that the Board was stable and with the appointment of two new Directors I have spent the year working with all to ensure smooth and active pursuit of the Club’s activities. I am very pleased with the workings of the Board and it is timely for the change in the Chair.”

“I am also pleased to announce that we have today allocated portfolio responsibility to Lynne Friis for Marketing and Communication.  Graham Christie will continue in the role of Membership Support. Maria Minchin will assume the Secretary role from the AGM.”

“I would also like to place on record my personal thanks and the Board’s appreciation for the great work given to the Club by Deb Cohen over four  years and more recently Bruce Beausang, both of whom left the Board during the year,” said Mr Smith.

With the announcement, Craig Humphrey noted “I am very honoured to become Chairman and have a great role model to move forward in Tom’s way of guiding the Club. I am also grateful that he has agreed to remain with us as Deputy Chair.”

The Directors will now have the following portfolio responsibilities-

Email: This email address is being protected from spambots. You need JavaScript enabled to view it.