One of Australia’s largest RV Clubs, the Australian Caravan Club (ACC), today welcomed the announcement of the opening of a further freedom camping area at Currabubula by the Liverpool Plains Shire Council Mayor Cr Andrew Hope.

The freedom camping area is located at the Recreation Ground in Maitland Street, Currabubula.

‘This initiative is another great achievement of the Liverpool Plains Shire Council (LPSC),’ said ACC National Deputy Chairman Tom Smith. ‘I am sure that RVers will make good use of this great facility and support local businesses during their stay.’

Mr Smith joined the LPSC Mayor Cr Hope, LPSC Councillors, members of the Currabubula Pony Club and the wider Currabubula Community at the official opening.  The facility, which allows a stay of up to 72 hours, has hot showers and flushing toilets for which patrons are asked to make a small donation.

‘The ACC was pleased to have been involved in the development of the LPSC Recreational Vehicle Strategy.’ 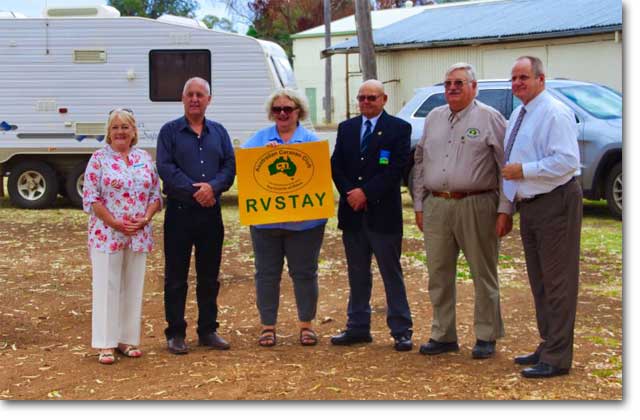 At the opening, Mr Smith presented Cr Hope with an ACC RVSTAY sign for display at the Currabubula Recreation Ground freedom camping area.

‘Credit goes to the LPSC for being so forward thinking and for opening up economic opportunities for its local businesses in this way.’

‘The ACC encourage our members using freedom camps to give back to the areas providing these camps by supporting local businesses wherever possible.’

‘I am sure the Currabubula local community and its surrounding area will reap the economic rewards from the increased business that RVers staying at the freedom camp will bring,’ Mr Smith said.