Yes our Club is exhibiting at the New South Wales Caravan Camping Holiday Supershow at the Rosehill Gardens Racecourse from Tuesday 24 April  to Sunday 29 April 2018.  You will find us at the Time to Roam vintage caravan display, a ‘must do’ journey back in time for any RVer attending the Show.

So if you are going to the Show and would like to know more about our Club, the Australian Caravan Club, why not drop in and say hello to our members on the stand?  They would love to meet you and have a chat.

Our Club is all about sharing Friendships and Adventure with like-minded people. 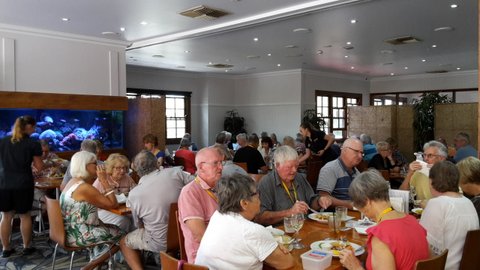 Our ACC Sunshine Nomads enjoy branch lunches between musters.  After lunching at the Coolum Hotel on Queensland's Sunshine Coast earlier this year, this month’s lunch was at the Palmwoods Hotel where everyone enjoyed the get together and the great food.

So far this year, musters have been held at Iluka in the New South Wales Northern Rivers region and Burnett Heads in Queensland.  Their next event is a two week tagalong to the Carnarvon Gorge in Central Queensland in May!

The Australian Caravan Club is delighted to welcome Takalvans to its member benefits programme. 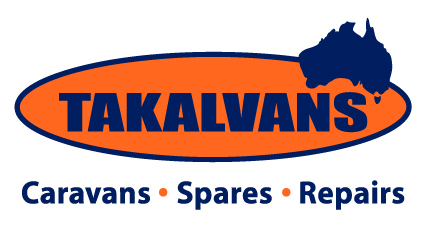 Takalvans is a family owned business which sell new and pre-owned caravans.  They have a large and comprehensive spare parts and accessories store.  Their trade qualified staff, service and repair caravans and mobile homes. They are a preferred repairer for most major insurance companies.

Takalvans offer ACC members a 5% discount off purchases to the value of $500, simply show your membership card to receive the discount.

ACC members - contact details for Takalvans can be found by logging onto this website using your username and password, then clicking on the orange Member Benefits – Non Accommodation button on this webpage.

The Australian Caravan Club is delighted to welcome Jayco Bundaberg to its member benefits programme.

Jayco Bundaberg recently moved to their new site after over 40 years at their previous site. The new premises were purpose built with an indoor showroom incorporating a massive parts and accessories department. They offer in house servicing and repairs, including insurance repairs, in their 8 bay workshop.  They also carry a huge range of new Jayco vans, various used vans plus offer caravan and camper hire.

ACC members - contact details for Jayco Bundaberg can be found by logging onto this website using your username and password, then clicking on the orange Member Benefits – Non Accommodation button on this webpage. 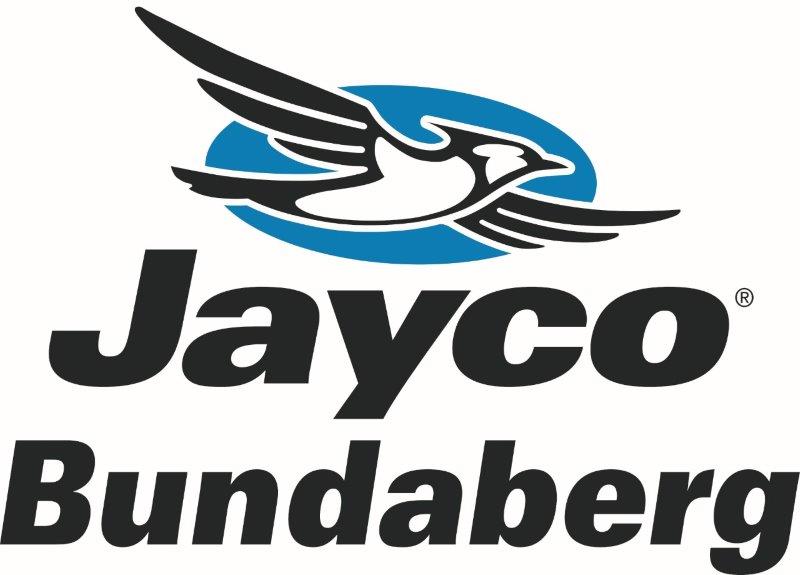 Back to the 60's in Toodyay

Our ACC Western Wallabies took a journey back to the 60’s and 70’s at their March muster in Toodyay, about 90 minutes north east of Perth at the northern end of the Avon Historic Tourist Drive which follows the Avon River.

The muster got off to a good start on Thursday night with a meal at the local hotel where the food was as great as the company. On Friday when the rest of the group arrived, some ventured into town to try the yummy pies and pasties at the local bakery while those who are rostered on for dinner preparation were busy getting the food organised for the Tapas night which included prawn cocktails along with lots of other fantastic finger licking food. 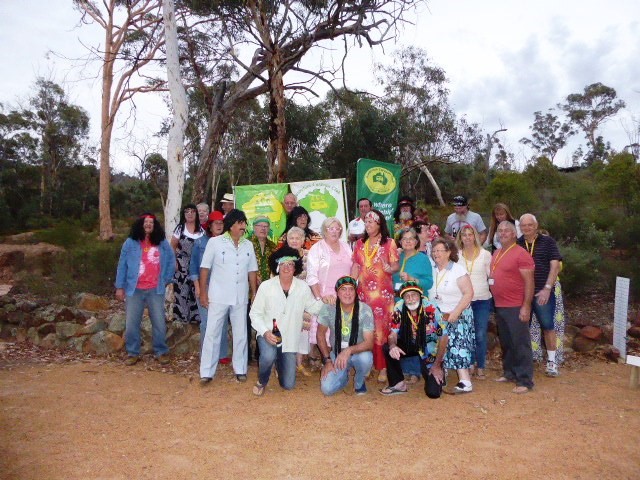 The theme for the weekend was 60’s and 70’s …. no, not the ages, the era, and a Quiz night with questions from those two decades was held after the dinner.

On Saturday, some members walked the 5.6klm Bilya Track, some played cards, some did Tai Chi and others just relaxed and got ready for the Saturday night dinner when all the members got into the swing of things by dressing up in their colourful costumes and enjoying food from that era.

Sunday morning was pack up day but all enjoyed the farewell breakfast before heading off in any different directions. Thanks to all for another fantastic weekend. The original village of Toodyay was one of the earliest inland towns in Western Australia with the first village established in 1836.  This was later moved to higher ground and named Newcastle in 1860. The name was changed to Toodyay in 1910 to avoid confusion with Newcastle in NSW.

For further information about the ACC or our ACC Western Wallabies branch, please contact the ACC on 1800 734 493. 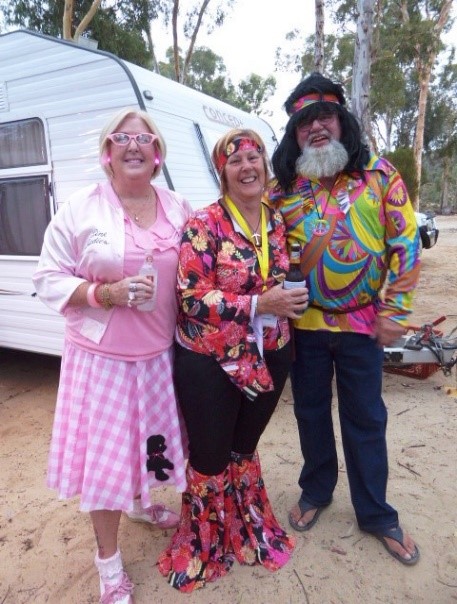 Situated on the Southern end of the Gold Coast with its unique private tidal saltwater billabong fed from the nearby Tweed River, this is the perfect retreat to fish, swim, visit all the Gold Coast has to offer or just relax. 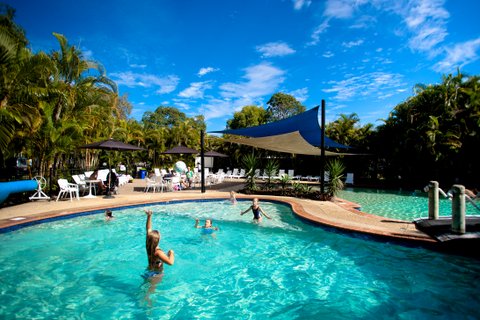 Boasting ‘the most sociable Grey Nomad community’, they offer a huge range of activities throughout the winter, including,

With ensuite, slab, grass and billabong sites available, there is something to please every RV’er.

BIG4 Tweed Billabong Holiday Park offer ACC members a 10% discount on powered sites to a maximum of $40 per stay.

Yamba has a stylish village charm, pristine beaches, national parks and award winning restaurants.  It was “the best town in Australia” as voted by Australian Traveller Magazine in 2009.

BIG4 Saltwater & Yamba Holiday Park is set on 130 acres of pristine parkland running alongside the Clarence River just 10 minutes outside of Yamba on the northern New South Wales Coast, and is hugely popular for its fishing and kayaking. 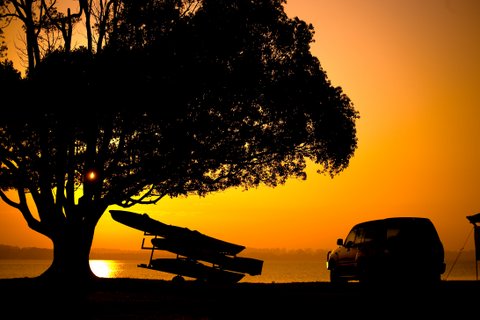 Offering easy access to a private boat ramp, free kayaks, lagoon pool, 2 camp kitchens and a fire pit, this dog friendly park is the perfect place to spend some time.

BIG4 Saltwater & Yamba Holiday Park offer ACC members a 10% discount on sites.  This is capped at $40 per stay during school holidays and is uncapped outside of school holiday times. 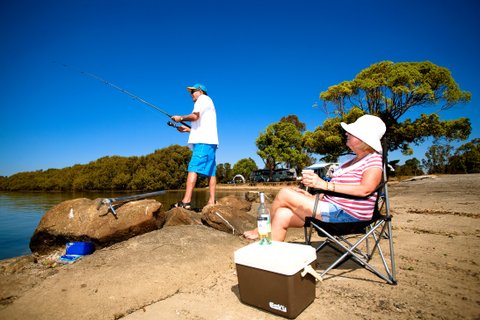